I'm not going to do calculus. Instead, I went to a graphing calculator and graphed it, taking the highest point on the graph for the highest tax rate that could be charged before things turned sour. 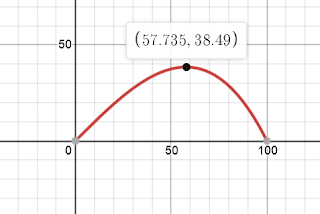 So it looks like we can use a 57.735% rate for the flat tax. Plugging that into the formula {950 x (r x 100) x (1 - r^2) where r is the tax rate being used, represented as a proportion. I'm sure that I've gotten this wrong somehow, so if any economists are reading this, feel free to leave a comment and give me something better to find an optimal rate on a Laffer Curve} gives us $36,565.5 Billion in total revenue over the next decade.

Yes, this system of flat-tax-and-UBI would lead to overall progressive taxation, but people earning sub-living wages will be taxed at a minimum more than corporations are currently being taxed at the maximum.

Is it worth it?

In pursuance of my call for an American Labor Party , I am going to lay out my vision for inducements to voter registration. The easiest way is to have a fully refundable $100 tax credit. Over a decade, by simply being registered to vote, a person will get a free $1000. Nice. In the United States, 239,247,182 people are eligible to vote . If this tax credit were eligible to everyone, and everyone registered to vote, the total cost of these tax credits would be $239,247,182,000 throughout the 2020s. Politicians will not care about finding any offsets for these tax credits because this program will do nothing but reward their voters. If I have learned anything about the corrupt institutionalist/careerist politicians we have today, it's that they love, for better or (usually) worse, to reward their voters.

The Case for Medicare for All (but from a different perspective)

Medicare for All Healthcare is expensive, even for employers. An insurance plan can cost over $20,000 per employee, with employers directly spending $14,000 per employee on providing healthcare. At the average wage ($50k/year), this is an additional 28% increase in the cost of each employee. At the median wage of $32,838, that amounts to an additional 42.6% cost. Because this is required spending, it acts like a tax on income, making income that much more expensive. Such excessive expenses are slowing down the creation of new jobs by making new workers more expensive than they otherwise have to be. If we are to cut taxes to create jobs, we should cut taxes to below 42%. For Liberals: Guaranteeing healthcare for all people will lower health disparities between different people of different races and class backgrounds. For Conservatives: It makes doing business in the US easier and cheaper for employers and allows US employees to more easily compete with workers overseas, leadin

Bad News from the Future

2030 Policies have switched from the price-stability (low and consistent inflation) focus to a focus on full employment. Republicans tried a payroll tax cut in the early 2020s, but that led to lesser funding for the Medicare Hospital Insurance Trust and the Social Security Trust, leading to the Medicare HI Trust to run out of money and restrict operations by 2023 and the Social Security Trust is expected to cut payouts across-the-board by over 20% by 2032. Unemployment is still high, rarely dipping below 10%. The recovery after the Corona Depression started out rocky, what with spikes of reinfections continuing through 2021 and 2022, pushed further by anti-vaccination movements. Republicans have taken a hold on the Senate as more people move South to more consistent climates, away from northern states. Low-population states keep their lower population, so more representation in the Senate than in the House. Southern states, with their higher population, are moving closer to beco